~ Serving Downingtown and East Caln Since 1887 ~

It is that time of year again, when the Alert No.1 “Elves” will drive me around the streets of Downingtown Borough and East Caln Twp. on Saturday, December 17, 2022.  When you hear the sirens and air horns of Tower 45, please come out onto your sidewalks and my Alert Elves will be happy to give all of the good boys and girls of all-ages, a candy cane!

Be sure to come-out and see me on December 17th. 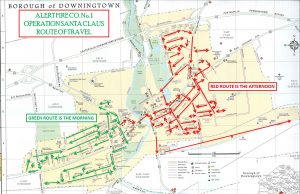 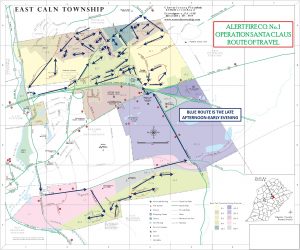 Today, is GivingTuesday and we would like you to consider volunteering with the Alert Fire Co. No. 1 or Minquas Fire Co. No. 2, of the Downingtown Fire Dept.!

Becoming a volunteer Firefighter, Rescue Technician, Fire Police or EMT is a very rewarding experience, a way to meet new people and a great way to serve your very own community.

If you are interested, please stop-by either station on a Wednesday evening, anytime after 7:00 PM to check us out. Or, visit our website, www.alertfire.org and click on “Become A Member” to download a Membership Application. 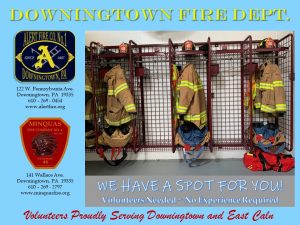 The members and officers of the Alert Fire Co. No. 1 would like to wish you and your family a Safe and Happy Thanksgiving! 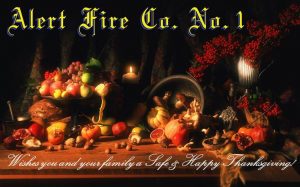 The members and officers of the Alert Fire Co. No. 1 would like to say thank you to all of our veterans who have served our country, so that we may enjoy our freedoms and security of the greatest nation on earth.  God bless all of you and God Bless America.

Last year we saluted our fire company members who served in our Armed Forces during the Korean War.

Today, on this 47th. Anniversary of the end of the Vietnam War we would like to honor the members of our company, who served our great nation during the Vietnam War.

Armistice Day is commemorated every year on November 11 to mark the armistice signed between the Allies of World War I and Germany, for the cessation of hostilities on the Western Front of WWI.  This event took effect at eleven o’clock in the morning—the “eleventh hour of the eleventh day of the eleventh month” of 1918.  The armistice initially expired after a period of 36 days.  A formal peace agreement was only reached when the Treaty of Versailles was signed the following year.  In 1954, Armistice Day was renamed Veterans Day to honor all veterans of all wars and conflicts.

This year we would like to honor the 28 members of the Alert Fire Co. No. 1, who served our great nation during the Vietnam War.  Below, is the list of those Alert Heroes:

The Alert No. 1 officers would like to invite all current and retired Active Force Members to the Annual Alert Thanksgiving Social Gathering on Wednesday, November 23, 2022, anytime after 6:45 PM.

As in years past, this will be a great opportunity for our members to catch-up with some old friends and for our current and retired members to meet and make some new friends!  If any of our retired members have any old photos or newspaper clippings, you are encouraged to bring them with you to share with our newer members.  And, please bring an appetite, because there will be plenty of good food, including fresh carved turkey to eat. The Downingtown Fire Dept. and the Alert Fire Co. No. 1 – Fire Prevention Committee recommends that when you change your clocks this weekend, that you change the battery in your Smoke Alarms and Carbon Monoxide Detectors, as well.

At 2:00 AM on Sunday, November 6, 2022 you will be changing your clocks back one hour, which means that Daylight Savings Time will end and Standard Time will begin.  Please take this time, this weekend to make changing your batteries a family project.  Something as simple as having a fresh battery may safe your life!